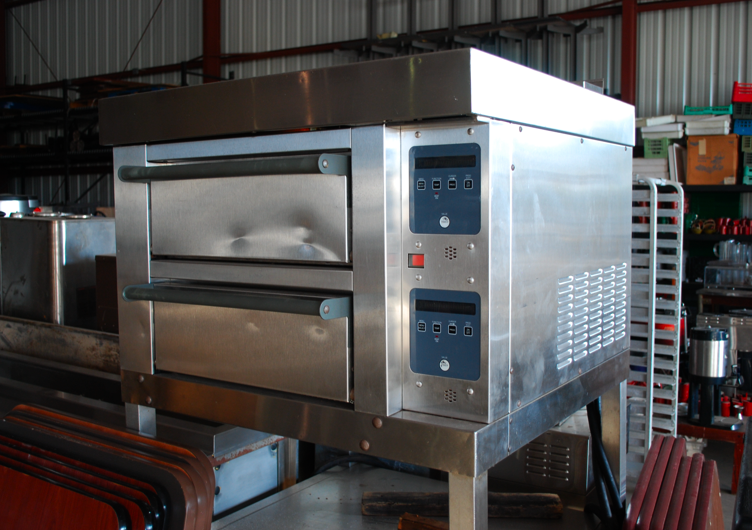 Like I mentioned in a previous post from today, One Fat Frog Restaurant Equipment just got in some really nice used double stack convection ovens. The purpose of this post is to bore you to tears. Just kidding, it’s to provide a concise rundown on what the heck a convection oven is and what it can do. Buckle up.

The definition of convection is, the transfer of heat through a fluid (liquid or gas) caused by molecular motion.

In convection ovens, this is accomplished by using a fan at the back of the oven, to move the air through the oven cavity, creating a more even temperature throughout and allowing multi shelf cooking. In a regular oven, when using Bake, the bottom element heats up forming a hot spot in the lower oven. Since hot air rise and the thermometer is at the top of the oven, the temperature you set for the oven, is at the top of the oven but not throughout the cavity. Most recipes were developed accounting for this variance in temperature

When using Convection, the temperature you set is now through out the cavity. To correct for this, most guides advise decreasing regular recipe temperatures by about 25 degrees and cooking times by 10 to 25 percent. That said, there is a learning curve, because every oven varies slightly in temperature.

In many of the high-end ovens, there are multiple convection settings:
Convection Bake, Convections Roast, Convections Broil, Pure Convection. On these models these I recommend the following:

Convection Bake- Drop temperature by 25 degrees, use only one rack. Best for cookies, cakes muffins, and breads.

Convection Roast – When roasting meats, leave temperature at suggested degree for the first 15 minutes or so to sear the meat. This will seal in the juices, then reduce temperature by 25 degrees. Use only one rack. Best for meats, turkey, chicken, duck and roasting vegetables.

Pure or True Convection- In addition to having a fan in the back of the oven, most high-end ovens have an additional concealed element in the back, around the fan. This allows for even multi rack cooking.
Reduce temperature by 25 degrees.